In June I travelled to NIME2018 at Virginia Tech to present some of work from the RITMO centre and EPEC project at the University of Oslo. This year, our NIME presentations were focussed on “standstill performance”—where participants have to stand as still as possible to create sound. In previous years, our group had created standstill performances using motion capture in the lab, but our new work was on ways to do this at live events, and even in installations, using the Bela single-board computer.

In an installation context, we worked on a hanging guitar system that was installed at Ultima 2017 in Oslo. The idea here was that each guitar was an independent “standstill” instrument with a Bela, acoustic actuator, and infrared distance sensor. Visitors could trigger a breath-inspired sonic performance by entering the beam of the distance sensor and not moving. In our installation, we used six guitars. Each guitar had quite a simple sonic interaction, but together the result could be complex and rewarding in the exhibition space. This work was presented in a paper that included the system design as well as some discussion of how the audience interacted with our artwork.

For mobile performances, we also used multiple Bela boards, but rather than IR sensors, we used Myo muscle sensor armbands to detect stillness, and provide a way for performers to control sounds without moving by subtly tensing muscles in their arms. Again, this was designed for an ensemble context: multiple performers standing still together to create new kinds of performances. Creating this work involved some technical challenges: using Myo sensors with Linux and on the Bela hardware was solved with an existing Myo C++ driver and connecting them to Pd on a Mac or Linux laptop was solved with a new Python application that I put together. Our Myo standstill instrument the 8 muscle sensors to control 8 sine tone oscillators. The angle and orientation of the performer’s arm was used to control the frequencies of these tones, and a distortion effect. Again, this was a simple instrument with complexity arising from its use in an ensemble context.

Our Myo and Bela work was presented in a poster, and also in a performance of our standstill work “Stillness Under Tension”. In this piece, a standstill ensemble assumes three poses over 9 minutes, with micro-movements and muscle tension allowing the performers to explore small sonic worlds through the Myo sensors. Alexander Refsum Jensenius and I had performed the piece previous in Oslo, and we were joined at NIME by a wonderful impromptu ensemble of colleagues from around the world: Anna Xambó, Federico Visi, and Fabio Morreale. With a standstill quintet, we were really about to spread out on the huge stage of the Fife Theatre at Virginia Tech’s Moss Arts Centre.

So overall we had a very successful NIME presenting our lack-of-motion performance work with the Bela platform! As usual, there were many amazing and inspiring projects on display and it was great to catch up with many colleagues and friends from all over the world. It was particularly good to see the conference seriously engage with gender imbalance through a packed workshop on Women in NIME, and several papers and discussions. This can seem like a difficult problem to address, but it evidently is not going to solve itself. Hopefully by introducing some positive actions to invite and keep women contributing to NIME we can make a difference in the gender balance in coming years, and also find pathways towards improving diversity more broadly.

Here’s the citations for the two contributions we had in the proceedings:

There’s more photos from NIME in my Flickr Album and below: 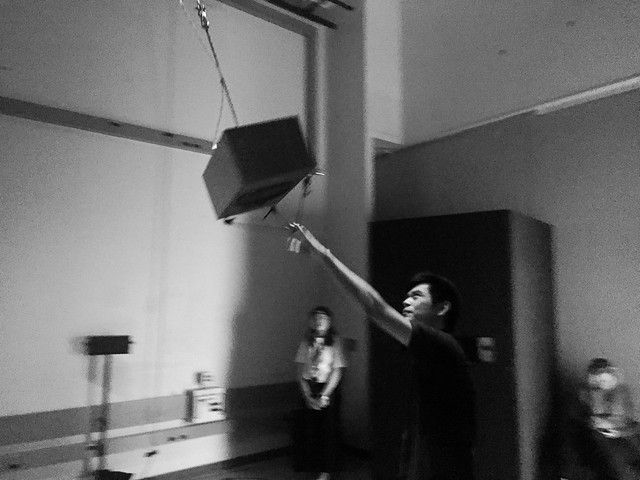